Today’s course is going to focus on some considerations when testing for speech sound disorders.  First, we are going to cover issues of reliability, validity and diagnostic accuracy as they relate to speech testing.  Then we will get into the coverage of speech testing. In other words, what sounds are tested and in which positions, et cetera.  We will think about some dialect issues, and then do a brief case study if time permits.

Let’s think about testing considerations, and as I have said over the past four courses, there is no one good test.  A good test is one that is psychometrically adequate, diagnostically accurate, and appropriate for your client and purpose of testing.  All of those factors combined will help you to decide whether or not a test is a good test for your specific client.

The answer to this question is that it depends on your client, it depends on why you are testing, and it depends on what you are trying to obtain from that testing material.  In 1984, McCauley and Swisher had ten criteria for reliability and validity.  They reviewed 30 tests of both language and articulation specific to the pediatric population.  Figure 1 shows that most of the tests met very few of the criteria. 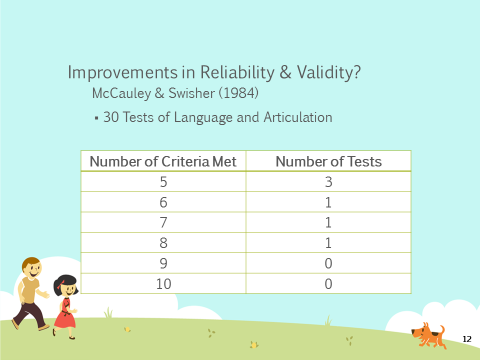 In 2014, Kirk and Vigeland looked at six single-word tests for children’s phonological error patterns.  They had twelve criteria – they had the McCauley and Swisher criteria and included some additional ones.  Of the six tests that were reviewed, they found that five of the tests met two of the 12 criteria, one test met three criteria, and none of the tests met four or more.

Flipsen and Ogiela (2015) also looked at speech sound production for single-word tests. They included the McCauley and Swisher criteria (i.e., the 10 criteria) as well as seven additional criteria. They found that of those tests, one test met three criteria, three tests met five, four tests met six, and two tests met seven. So for single-word tests, we seem to be doing slightly better in terms of reliability and validity.

The next piece, especially for speech sound disorders, is that we really need to be thinking critically about the coverage of the tests. When I first started clinical practice, I never really thought critically about what sounds are being tested and how many opportunities, et cetera. It wasn't on my radar at that time.

All of these factors play a role in whether or not a child can accurately produce a word. There are other factors, but these are the ones that emerge as being particularly problematic for children.

When selecting a standardized test, we have to think about whether or not the test developers have taken some of these factors into account.  Is the test really determining what the child can and cannot do?  In terms of speech sound disorder tests, we need to ask these questions: What sounds are actually tested? In what position of the word? How many opportunities does the child have to produce those sounds? What is the phonetic context of the word? Is it a simple consonant-vowel-consonant construction or is it a more complex consonant-consonant-vowel-consonant-consonant construction?  Those are the factors that need to be considered when thinking about the coverage of a test of articulation or phonological processes.

Eisenberg and Hitchcock also looked at word final position. In English, there are 21 sounds that can occur in word final position. Again, this is one phonetically-controlled word, so the child is getting one opportunity to produce that sound. You can see from the chart in Figure 2 that none of the tests tested 21 sounds; they ranged from 14 to 20 sounds. 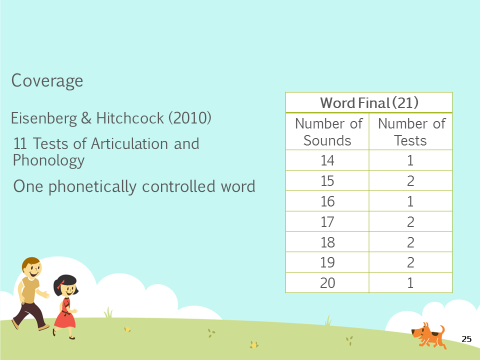 What this research shows is that in most instances, children are only getting one opportunity to produce each of those sounds in one phonetically-controlled word.  Remember, we said many factors affect the child's ability to produce the word. And even though the test is controlling for phonetic context, it is also controlling for the syllabic complexity and the stress pattern.  What they have not controlled for is word familiarity. So, there is still the possibility that in that one word, that one opportunity, the child might misarticulate the sound because they're not familiar with the word.

They also looked at it in terms of word final position where there were two phonetically-controlled words with different vowels, so that the phonetic context is different. You're not using the same consonant-vowel combinations. Again, none of the tests tested 15 or more sounds in word final position even though there are 21 sounds that could occur there. Most of the tests are really only testing very few sounds (see Figure 3). 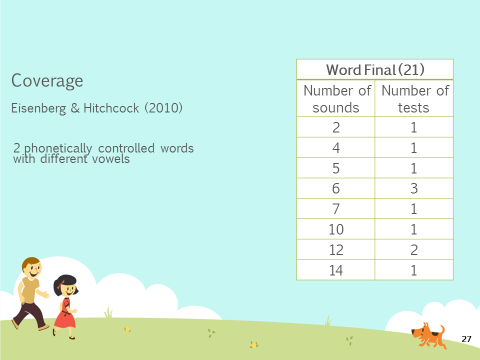 We have to think cautiously about children. How many opportunities are they actually getting? Are these opportunities phonetically controlled? How familiar are these words to the child? Because it's certainly a possibility, that the child can produce the sound in isolation or if they are given a different word list suddenly they can produce all of the sounds that they just missed on the standardized test. There are so many reasons why a child might not do well on a standardized test and that is something we have to remember, especially when very few tests are reporting diagnostic accuracy values. We want to be very cautious and thoughtful about how we are using these tests.

When diagnostic accuracy is combined with coverage, one of the tests that does report diagnostic accuracy is the Diagnostic Evaluation of Articulation and Phonology (DEAP, 2006). This is what they reported in the research articles. The DEAP has one phonetically-controlled word. There are 22 initial and 17 final. For two phonetically-controlled words there were two initial and six final.

The other test is the Clinical Assessment of Articulation and Phonology (CAAP, 2004). When these research articles were written, the CAAP-2 was not yet published. So all of the information that I'm giving you is based on the analysis of the first edition of the CAAP. The first edition of the CAAP does report sensitivity and specificity information and it tests 20 words in word initial and 19 in word final position. That's a one phonetically-controlled word. For two phonetically-controlled words, there are four in word initial and six in word final. In the tests that do have diagnostic accuracy values listed in the examiner’s manual, they don’t actually do a completely thorough test of all of the sounds.

As I said, this research was conducted before the CAAP-2 came out. So, I would encourage you to look at the CAAP-2 examiner's manual to see what kind of information it provides.

What we have talked about in coverage so far is tests of single word production. But as you know, when working with preschoolers, especially those who misarticulate sounds, you are not only thinking about single sounds but the phonological processes that the child might be engaging in and whether those processes are age-appropriate or not.

With phonological testing, we want to think about what processes are tested and how many opportunities the child gets to produce those processes. In 2015, Kirk and Vigeland looked at 11 different error patterns: 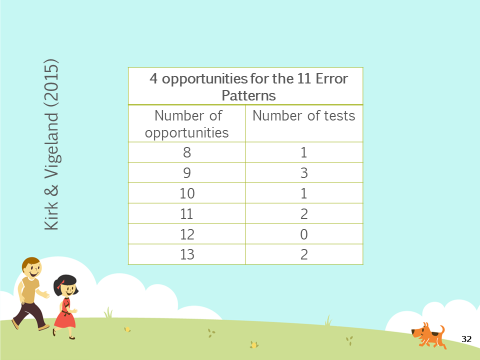 Figure 4. Diagnostic accuracy and coverage data for phonological testing on the CAAP.

In Flipsen and Ogiela’s 2015 article that reviewed 10 tests of single-word production, they asked, "Did the test developer discuss the issue of dialect and its potential influence on test scores?" They found that of the 10 tests, four of them did not address the issue at all, which is particularly concerning. Of the six that did address dialect, five manuals simply stated that clinicians need to be aware that dialect could affect scoring and interpretation. My thought is, "Well, it’s nice that you said it, but what do I do as a clinician? How do I score these items? What do I do with it?" 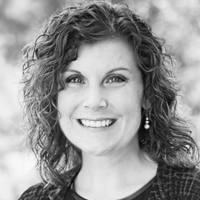 Stacey L. Pavelko, PhD, is an assistant professor and Undergraduate Program Director in the Department of Communication Sciences and Disorders at James Madison University.  Her research interests include language and literacy development in preschool and early school-aged children, high-quality professional development for preschool teachers, the diagnostic accuracy of screening and diagnostic measures, functional language assessment and treatment, and interprofessional education and practice.

1 https://www.speechpathology.com/slp-ceus/course/apparently-this-not-going-well-9726 ApPARENTly This Is Not Going Well: Difficult Conversations with Parents This course explores emotional intelligence (EQ) and how to "plug in" and use it in situations that go awry with parents of clients. Specific strategies for handling difficult situations and de-escalating arguments are discussed. auditory, textual, visual

ApPARENTly This Is Not Going Well: Difficult Conversations with Parents

5 9091
9091 Reviews
AG Bell - LSLS/1.0 Domain 5, CE-SPC-21-3322; ASHA/0.1 Intermediate, Professional; IACET/0.1; Kansas LTS-S1370/1.0; SAC/1.0
View CEUs/Hours Offered
This course explores emotional intelligence (EQ) and how to "plug in" and use it in situations that go awry with parents of clients. Specific strategies for handling difficult situations and de-escalating arguments are discussed.
Course Details
2 https://www.speechpathology.com/slp-ceus/course/autism-outreach-podcast-parents-as-9810 Autism Outreach Podcast: Parents as an Important Part of the Therapeutic Team This podcast discusses the important role that parents serve as members of the speech/language therapy team, and resources that clinicians can provide to them. Specific strategies that can be used to support parents, including those related to emotional regulation, are highlighted. auditory

Autism Outreach Podcast: Parents as an Important Part of the Therapeutic Team

4 1510
1510 Reviews
AG Bell - LSLS/0.5 Domain 5, CE-SPC-21-3322; ASHA/0.05 Introductory, Professional; IACET/0.1; IBCCES/0.5; Kansas LTS-S1370/0.5; SAC/0.5
View CEUs/Hours Offered
This podcast discusses the important role that parents serve as members of the speech/language therapy team, and resources that clinicians can provide to them. Specific strategies that can be used to support parents, including those related to emotional regulation, are highlighted.
Course Details
3 https://www.speechpathology.com/slp-ceus/course/phast-phonemic-awareness-phun-10101 Phast Phonemic Awareness Phun The critical importance of phonemic awareness, especially for children with a history of speech and/or language delays, is discussed in this Fast Class. A variety of assessment and intervention activities to improve phonemic awareness are described. auditory, textual, visual

5 3904
3904 Reviews
AG Bell - LSLS/0.5 Domain 3, Domain 9, CE-SPC-22-0324; ASHA/0.05 Intermediate, Professional; IACET/0.1; Kansas LTS-S1370/0.5; SAC/0.5
View CEUs/Hours Offered
The critical importance of phonemic awareness, especially for children with a history of speech and/or language delays, is discussed in this Fast Class. A variety of assessment and intervention activities to improve phonemic awareness are described.
Course Details
4 https://www.speechpathology.com/slp-ceus/course/dirfloortime-174-beyond-playing-on-9642 DIRFloortime®: Beyond Playing on the Floor The DIRFloortime® framework can be used not only with children with autism, but with a wide variety of ages and diagnoses. This 4-hour master class describes DIRFloortime principles and concepts such as Functional Emotional Developmental Capacities (FEDCs) and relationship-based intervention. Case studies provide examples of goals and therapy activities, including virtual experiences, for various populations. auditory, textual, visual

DIRFloortime®: Beyond Playing on the Floor